Founders – Chairman of the Board & Corporate Secretary

Muth Electric was founded in 1970 by Dick and Darlene Muth a young couple beginning life in Ethan, SD – a small town near Mitchell, SD. With their hard work, determination and a steady addition of dedicated employees, the growth of the company has been consistent.

The goal of Muth Electric has never changed – to provide electrical services to all customers in a safe, timely and professional manner. This would be carried out by a team of employees that have this very mission in mind when serving their customers.

Dick and Darlene expect the mission that has enabled the growth to this point to continue into the future and enable even more growth for Muth Electric, Inc.

Paul Muth has built a lifetime of experience with Muth Electric. He began with the company at age 16 and continued while attending the Electrical Construction program at the Mitchell Technical Institute.

In his 40 years at Muth Electric, Paul began by working on projects in the field and then quickly moved to estimating, Vice President of Operations and Co-President in 2015. He has directed the field operations while growing the company from a smaller company to one with over 360 employees in a number of locations.

Under Paul’s direction, the project mix has grown to a list of the most complex projects that take place in the upper Midwest. Utilizing his vision, no project has been beyond the capability of the team that has been built under his direction.

Over the years Paul has been involved in many organizations that have helped to develop the construction industry as well as his local community and state. The Associated General Contractors, SD Salutes, Big Friends-Little Friends to name a few have benefited from his involvement. 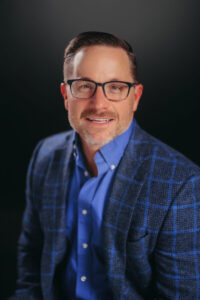 David was promoted to President in January of 2023 and will continue to hold the position of Chief Operations Officer; a position he has held since 2020. David began his career with Muth Electric working in the warehouse as a teenager. He then went on to hold several positions within the company throughout his many years at Muth Electric including: Apprentice Electrician, Journeyworker Electrician, Electrical Estimator, and Operations Manager. David is also a 1996 graduate of the Electrical Construction and Maintenance program at Mitchell Technical College.

As President and COO, David assumes responsibility of overseeing the day-to-day operational functions and directing the field operations in our multiple divisions.

In his role as President, David’s greatest passion is creating a world class culture for Muth Electric employees while striving to always provide a positive customer experience.

Paul was promoted to Vice President of Operations in 2018 and was most recently the Rapid City Division Manager.

As Vice President of Operations he assumes responsibility for the field operations in each of divisions of Muth Electric, Inc.

As a graduate of the Mitchell Technical Institute, he has been with the Muth Electric team since 2001 and started with the company as an Apprentice Electrician then a Project Foreman in our Mitchell Division.

Paul uses his involvement in many very technical projects to see that the operations of Muth Electric are carried out in an organized and professional manner throughout the company.

Lyndon joined the Muth Electric team in 2018 as the Chief Financial Officer. Lyndon has 14 years of experience in the financial field. He spent 6 years working in public accounting. Lyndon worked across the Midwest specializing in the construction industry, retail, and healthcare. After public accounting Lyndon spent 8 years as the Chief Financial Officer of an agricultural retail business across South Dakota and Iowa.

Lyndon leads a great accounting team out of our corporate office in Mitchell, SD. He guides the organization to be prepared for growth and always being willing to change. Lyndon enables everyone to be frontrunners in efficiency so we can serve our customers in the best way possible.

Lyndon is a graduate of the University of Sioux Falls. He obtained his Certified Public Accounting license in 2009.

Billy became the Operations Manager for Muth Electric in 2015. He has been with Muth Electric since 1997 and is a graduate of the Mitchell Technical Institute. He was previously in the Mitchell service department and then as an estimator in the Corporate office for five years.

As Operations Manager, Billy is responsible for oversight of the Watertown, Huron, Omaha, Columbus and Muth Technology divisions. He is tasked with assisting them not only on a day to day basis but also in seeking growth and efficiency in their divisions.

Billy is involved in the Mitchell community in many ways including the Mitchell Technical Institute Electrical Construction and Maintenance advisory board as well as an active member of the Mitchell United Way. 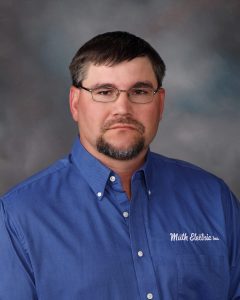 Gary Schoenfelder began working for Muth Electric in May 1995. He started as an Apprentice Electrician, worked his way up to become a Project Superintendent and is now the Division Manager in our Mitchell location.

Gary has been superintendent on many projects over the years including John Paul II School addition and remodel in Mitchell, various projects at Avera St. Benedict Health Center in Parkston, SD, Crow Creek School and Dorms in Stephan, SD, Sanford Clinic in Dickinson, ND, the McGovern Library, Allen Hall remodel and the Avera Health and Wellness Complex on the Dakota Wesleyan University campus in Mitchell.

Gary is a graduate of the Electrical Construction and Maintenance program at Mitchell Technical Institute.

Shannon joined the Muth Electric team in 1997. He worked his way up from Apprentice Electrician, Project Foreman, Estimator and Service Manager to currently serving as our Sioux Falls Division Manager. Shannon was very instrumental in developing our HV / Wind Energy Maintenance Services group at Muth Electric.

Completing various types of projects including medium voltage work has given Shannon a very well rounded background in the electrical field.

Shannon also has a Bachelor Degree from the University of South Dakota and he completed the four year IEC Dakotas Apprenticeship Training Program. He has served two terms on the City of Sioux Falls Electrical Board of Appeals and Examiners. 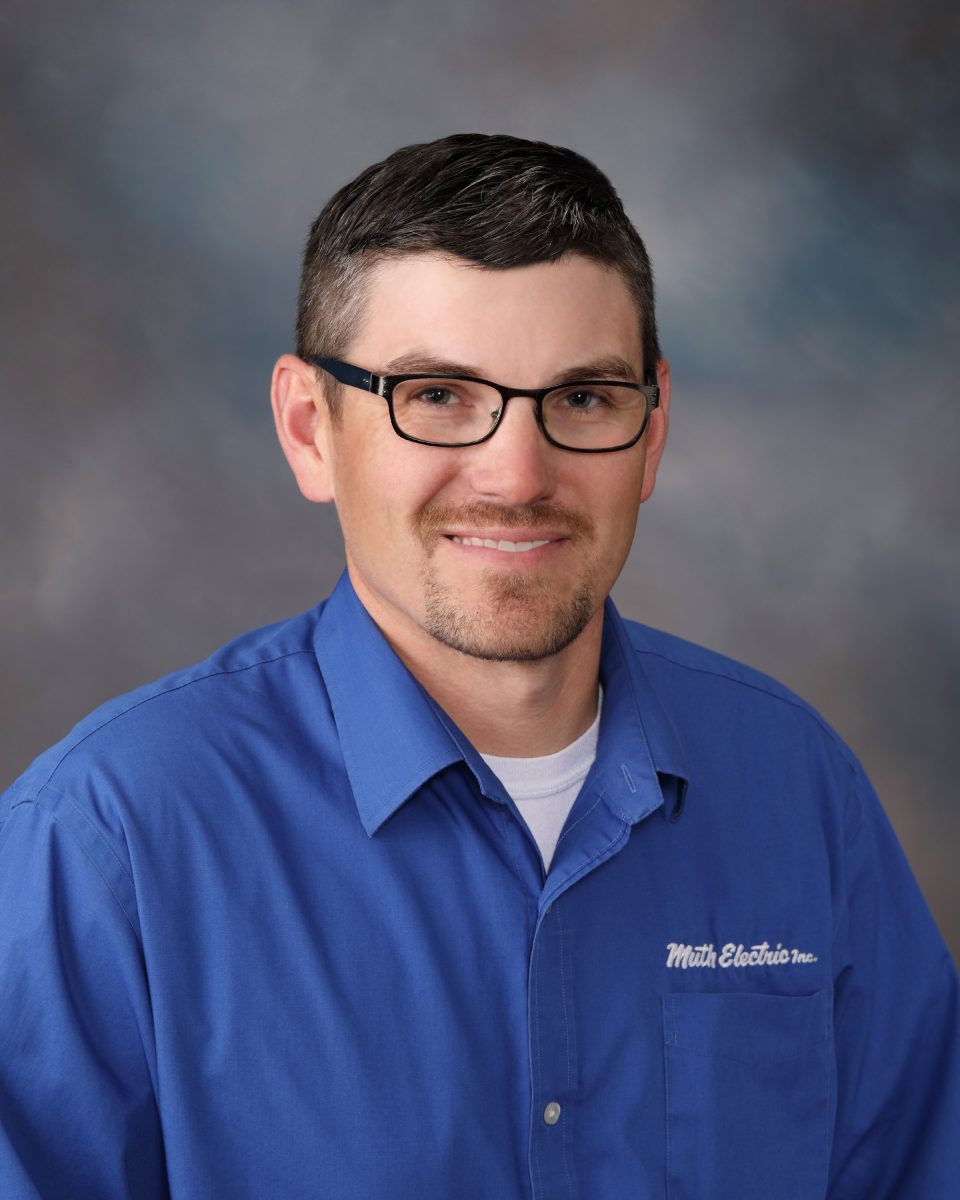 Scott Hall started as an apprentice with Muth Electric in our Rapid City Division in 2001 after graduating from the Electrician/Industrial Electronics program at Western Dakota Technical Institute. Shortly after obtaining his Journeyworker license Scott became a Project Superintendent and grew in his capabilities at our company.

Scott has completed a number of commercial, medical and industrial projects including specialized systems, with the full use of prefab and lean construction principles. Those projects included numerous projects at Ellsworth Air Force Base, projects at Chadron State College, rural water systems, and the new Menards in Gillette, WY.

In 2015 Scott was promoted to Assistant Project Manager in the Rapid City Division and successfully managed various projects for the division. 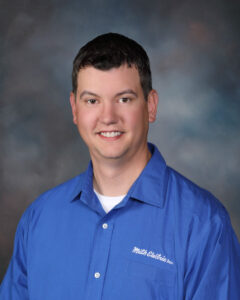 Austin is the Manager of the Watertown Division and oversees the Brookings location service department. 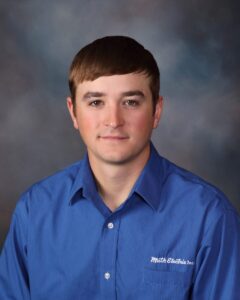 Brody began his career with Muth Electric in 2015. He graduated from the Electrical Construction and Maintenance program at Mitchell Technical College in 2017 and obtained his Journeyworker license in 2018. Brody worked as a Project Superintendent for the Huron division for five years before becoming the Division Manager in 2022. During his time as a Project Superintendent, he ran many notable projects, including the Pierre Water Treatment Plant, The DEX, Huron High School IMPs, State Fair Beef Tie Outs, Huron Auditorium Lighting, Trussbilt Rem, Wheatgrass Apartments Phase 1 and 2, and Dakotaland FCU.

Barry joined Muth Electric in September 2019 and came to Muth Technology with nearly 20 years of experience in the communications industry.

Barry and the Muth Technology team is tasked with covering data cabling and fiber optic lines over the entire area the Muth Electric serves. 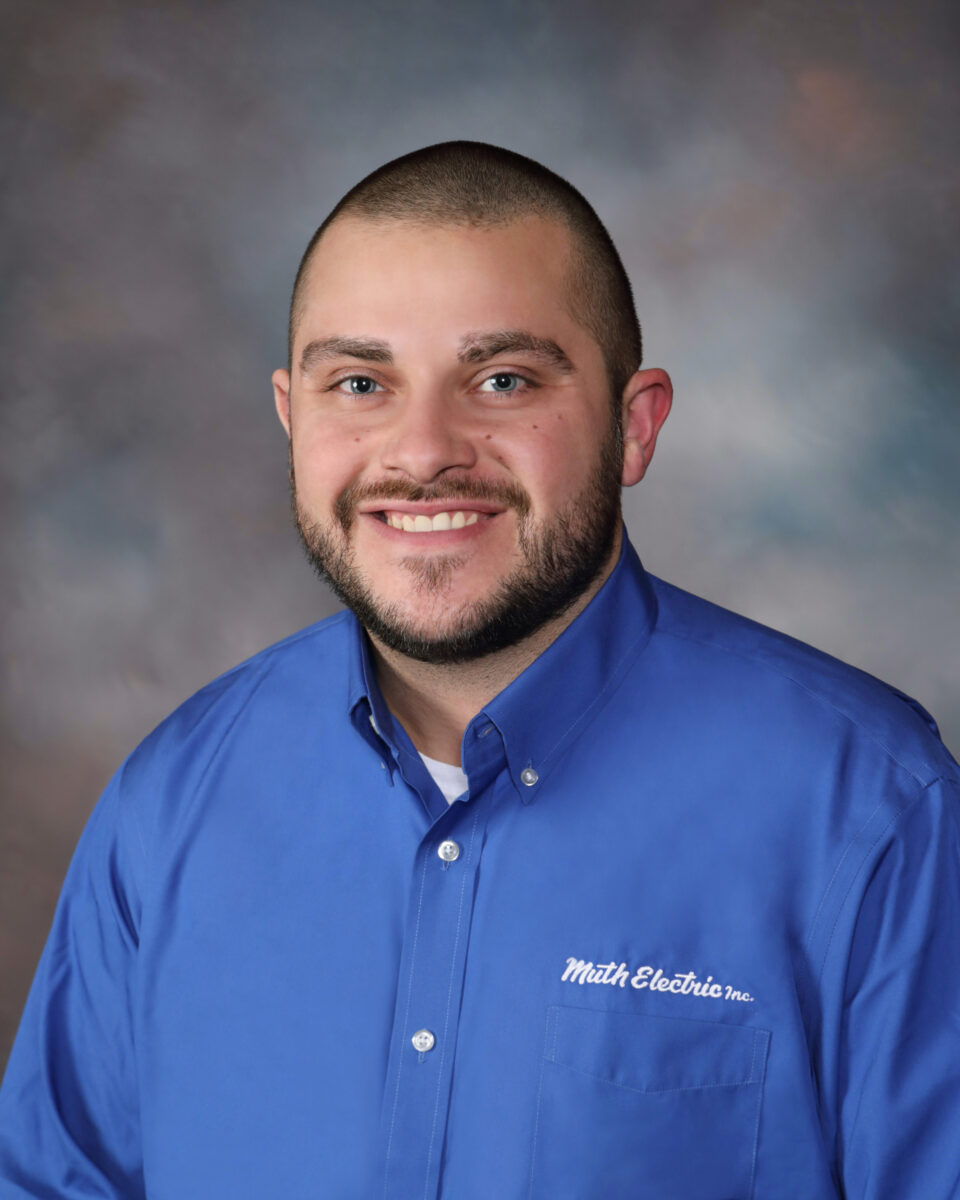 Nate Louwagie started as an apprentice electrician in our Sioux Falls, SD division in 2013 after graduating from Ridgewater College in Willmar, MN. He worked on several big projects like the Denny Sanford Premiere Center and the USD Sports Complex. Shortly after obtaining his Journeyworker license in 2016, Nate was promoted to Project Superintendent in the Sioux Falls division. As a superintendent, he ran many notable jobs including multiple POET Ethanol projects, WinChill Phase 1-3, Fleet Farm, and Groton Elementary. 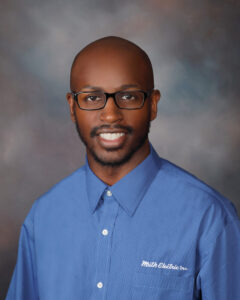 Denzel Hodges began his career with Muth Electric in the spring of 2019. He finished the Independent Electrical Contractor (IEC) program in May of 2021 and obtained his Journeyworker license shortly after in October of 2021. Prior to becoming an electrician, Denzel graduated from Lincoln High School in 2013 and served in the Army. During his time with Muth Electric, Denzel has worked on many notable projects including Fleet Farm, The Monument, Sioux Center Senior Care, Sioux Center Water Treatment Plant and 3M. 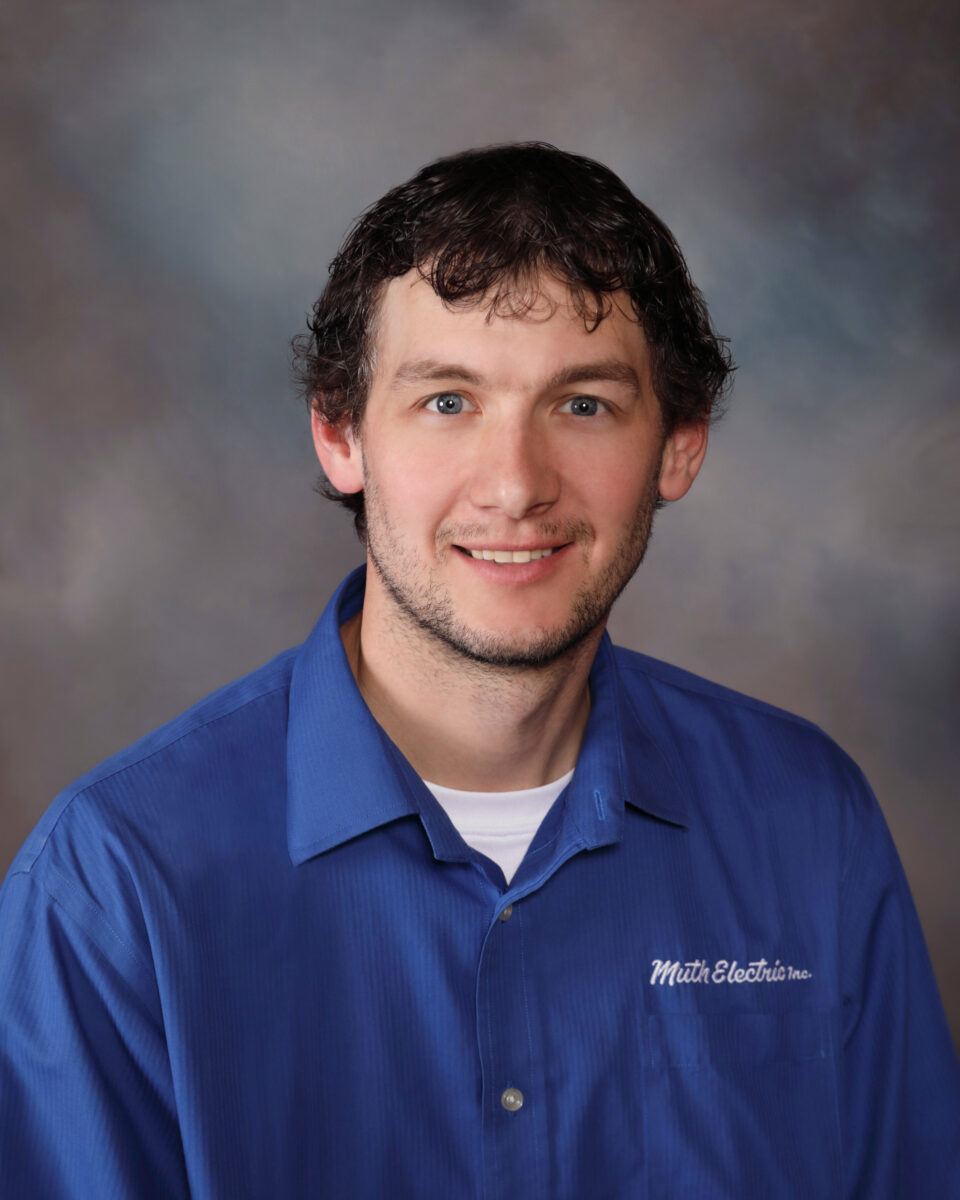 Logan Stokke began his career with Muth Electric in 2008 after graduating from Minnesota West-Jackson Technical College. He started as an apprentice electrician in the Sioux Falls division and obtained his journeyworker’s license shortly after. Following his work on impressive projects like the Scheels addition and remodel, Logan was promoted to Project Superintendent and ran his first job on OFFUTT Air Force Base in Nebraska. After leading many successful projects for the Sioux Falls division, including the Wilson Trailer Expansion and Feeding South Dakota, Logan transferred to the Watertown division in 2017 where he ran notable projects like the Madison MN elementary school remodel. In 2022, Logan became the Prefab Manager after finding enjoyment in prefab while being both the field employee installing it and the superintendent drawing it up.